AutoNaut has played a vital role in enabling The Flanders Marine Institute (VLIZ) to seize upon the quiet of lockdown to map the underwater soundscape of the Belgian section of the North Sea.

Using its near silent AutoNaut USV research vessel, Adhemar, VLIZ has been able to record current noise levels, which will be compared with the marine soundscape once normal sea traffic and marine activities recommence. This will help to determine the impact of manmade noise on natural sea life and the marine environment, building a picture of the marine soundscape in conditions that may never again be possible.

Following a 15% fall in shipping intensity in the North Sea since the start of the pandemic, VLIZ put its AutoNaut USV robot Adhemar into action to carry out measurements of the underwater noise in the turbid and shallow coastal waters of Ostend-Bredene. Some footage of Adhemar in operation can be seen here.

Undertaken with the support of the agency for Maritime and Coastal Services (MDK) and FPS Mobility and Transport, the project took advantage of the unique current circumstances that allow a record of reduced human activities to be compared with a more normalised soundscape in post Covid-19 conditions.

Under normal circumstances, human interventions such as noise emanating from shipping, pile driving, and other activities can affect the soundscape of the coastal waters and North Sea, impacting on marine animals. Masking natural ambient noise, this extra underwater sound can disturb sea animal behaviour or even result in hearing damage. This is because sound is carried more than four times further in water than in the air, which is precisely why many marine animals use sound to communicate, determine their position and search for prey.

VLIZ will analyse the sound recordings to identify underwater sounds originating from marine animals and the environment, including sounds from fish, invertebrates and other species that are typically masked by anthropogenic activities. This will allow VLIZ to investigate whether a different underwater soundscape can be observed as a result of reduced shipping traffic.

VLIZ executed the mission in close collaboration with the Flemish agency for Maritime and Coastal Services (MDK) and the Federal Public Service for Mobility and Transport, which have responsibility for the safety and regulation of shipping, and in close coordination with the Maritime Rescue and Coordination Centre (MRCC) in Ostend, which stipulates conditions and provides permits for USV activity. Several missions took place in April and May 2020, conducted during daylight hours and only in conditions of good visibility in order that the missions were planned, undertaken and executed without impact on shipping traffic.

The results from the study, which are currently being processed, will be announced later this year in the autumn, followed by a further programme of additional measurements – part of the LifeWatch observation programme – which are planned for the future.

Phil Johnston, Business Development Manager at AutoNaut, comments: “We are thrilled to see VLIZ running Adhemar, not just for the data collection in these strange times but also for the adaptations they’ve made to operate the 5 m USV in the southern North Sea. We look forward to working with VLIZ on future development and missions.” 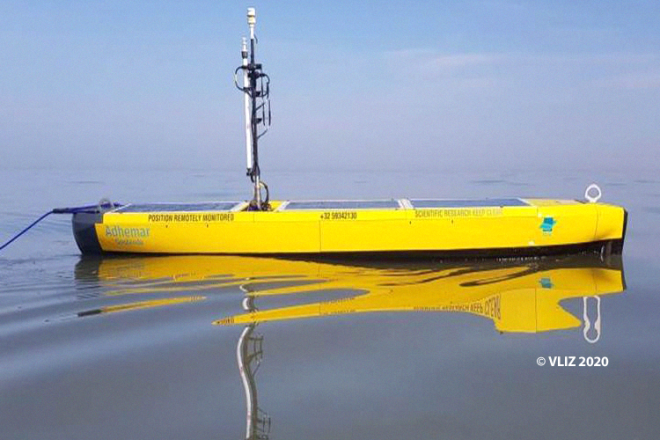