AutoNaut is being developed to explore the Southern Ocean

AutoNaut is being developed to survive the extreme environment of the Southern Ocean surrounding Antarctica. To make this possible, partners at the University of East Anglia and University of Exeter are collaborating with AutoNaut on key technical solutions such anti-icing, ice detection and avoidance, and harvesting power in the dark.

Scientists at the University of East Anglia are using a sea-water ice tank to test a range of surface coatings that it is hoped will prevent salt water spray accumulating as ice on the AutoNaut, which might destabilise it. They are also testing such parts as hatches, PV panels, and electronics enclosures with air temperatures down to -25 and sea water down to -2C.

After 18 months of work, all the new solutions will be brought together in a design review, after which a new AutoNaut will be built for ‘high latitude’ missions. Ultimately, the unmanned boat will be used to autonomously gather and transmit data from the ocean surface (for instance, air temperature, wind speed, plankton abundance or carbon dioxide) so scientists can measure how much heat and gases are exchanged between the atmosphere and the ocean. These sensors will enable scientists to better understand the extreme environments of high latitude oceans – with significant reduction in cost and risks relative to conventional research vessels or other techniques.

AutoNaut is an efficient way of collecting data over long distances and long missions and, as such, will help scientists understand how warm water gets underneath the Antarctic ice to melt it and cause sea level rise. It will also provide information about what drives polynyas, the areas of open water surrounded by sea ice, and the role they play in the Earth’s climate and carbon cycle.

One of the many challenges of designing a boat to withstand the rigours of the polar regions is how to stop the boat being covered in ice. With a possible air temperature below -10C, any sea spray onto the boat from breaking waves at the ocean surface will immediately be frozen. This ice would clog up the scientists’ sensors, but more seriously could make the boat top heavy so it might capsize and fail to self-right.

Mike Poole, AutoNaut Director said: “Antarctic waters are a serious challenge, but one we are thrilled to take on. If we can build an unmanned boat to survive in the Southern Ocean, we’ll be sure it can thrive anywhere. Also, the University of Exeter is working with us on ways to harvest energy in the dark of winter to supply the electronics and sensors on board this high latitude AutoNaut. Other challenges include detecting and avoiding small ice.”

The reason this is important is because there is a real shortage of data particularly from the Southern Ocean. There are very few ships there, especially in winter just because it is so rough. For example, the data conflicts on whether the Southern Ocean is absorbing CO2, as in climate models, or whether it is releasing it. Scientists are very keen to establish what is really happening. To be able to do this autonomously, over a long period, and without putting people at risk, will be a real plus.

Top image: Martin Wadley of UEA is holding up an AutoNaut PV panel which is used to harvest sunlight to provide all onboard electricity. It is being tested for its efficiency in extreme cold, and also later he will test hydrophobic surface coatings designed to prevent icing. Sea-ice tank operating at -25C air, and -2C salt water. LED ‘ceiling’ providing daylight equivalent of Antarctic summer.

Bottom image: Close up of the tank test pieces. 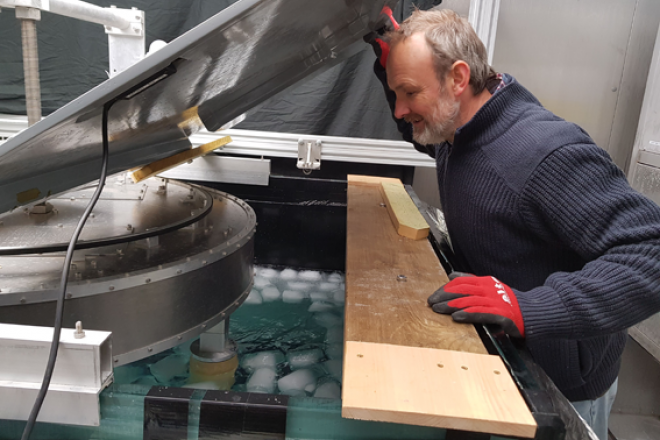 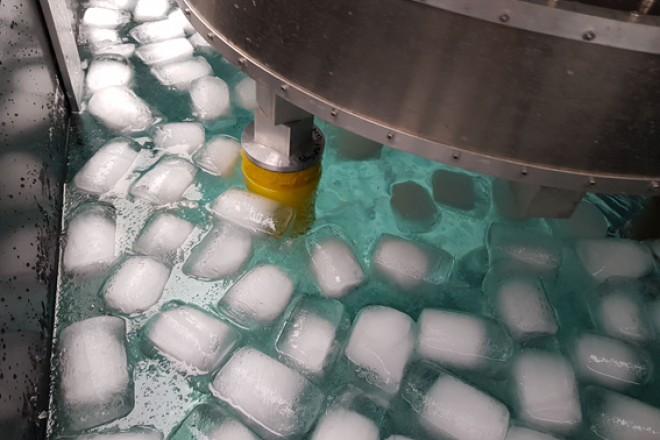